NOTE: The original vulnerability was in the Linux kernel, but in-the-wild exploitation was only seen on Android-based devices, which run Android-specific kernel forks

Disclosure or Patch Date: it's complicated (but the Android bulletin is from 6 November 2021)

Did you have access to the exploit sample when doing the analysis? no

ep_loop_check_proc() is trying to increment the refcount of a file with get_file(). However, get_file() is only allowed when a refcounted reference is already held to the file; and ep_loop_check_proc() instead relies on locking ep->mtx to protect the weak reference to the file from concurrent removal by eventpoll_release(), which doesn't prevent encountering a file with refcount zero.

Here is a diagram of the relevant lifetime states of struct file: 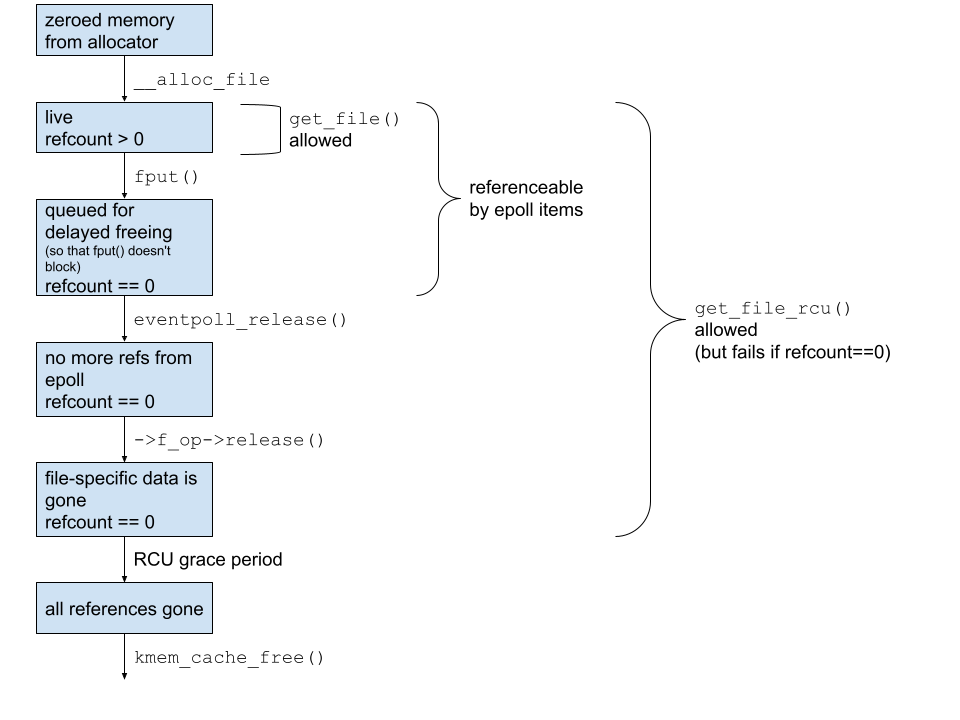 get_file() is replaced with get_file_rcu(), which is valid for (a superset of) all possible states of the file.

Thoughts on how this vuln might have been found (fuzzing, code auditing, variant analysis, etc.): Since the bug was quickly fixed in upstream Linux, but not in all Android devices, there's a good chance that the attackers specifically searched for memory corruption fixes that are present upstream but not in Android devices.

This reminds me of https://googleprojectzero.blogspot.com/2019/11/bad-binder-android-in-wild-exploit.html , another case where a bug was fixed upstream but not in all Android kernels.

This means that devices by Android vendors who only cherrypick bugfixes referenced in Android Security Bulletins, rather than pulling the complete Android common kernel tree, will have been vulnerable for almost a year, even though upstream stable releases (and Android common kernels) were only affected for ~2-3 weeks.

That doesn't necessarily mean that all Android devices were affected that long though; for example, Pixel 4 XL devices seem to have been patched in their March 2021 security update through the periodic LTS update from 4.14.191 to 4.14.199. The kernel versions that were shipped to Pixel 4 XL devices are (from running strings on boot.img in the firmware images):

Exploit strategy (or strategies): N/A - no exploit sample to analyze

Part of an exploit chain?

Areas/approach for variant analysis (and why):

I think there are two approaches for variant analysis here:

I found no variants with clear security implications.

Re #1, the following upstream Linux commits referenced in bulletins from 2020 and 2021 are referenced by followup fix commits:

Re #2: The only place that looks vaguely interesting in that regard is ep_item_poll(): From what I can tell, it can invoke vfs_poll() on a file whose refcount is already zero, but only before the file's ->release() handler is called. But I think that's fine.

What are structural improvements such as ways to kill the bug class, prevent the introduction of this vulnerability, mitigate the exploit flow, make this type of vulnerability harder to exploit, etc.?

Ideas to kill the bug class: In my opinion, the bug class here is "object state confusion", and killing the bug class would have to involve using static analysis and annotations to sanity-check whether object states match the requirements.

Other potential improvements: When cherrypicking specific security fixes, it would probably be a good idea to at least monitor the upstream repository for commits that refer to the cherrypicked patch with Fixes:.

What are potential detection methods for similar 0-days? Meaning are there any ideas of how this exploit or similar exploits could be detected as a 0-day?